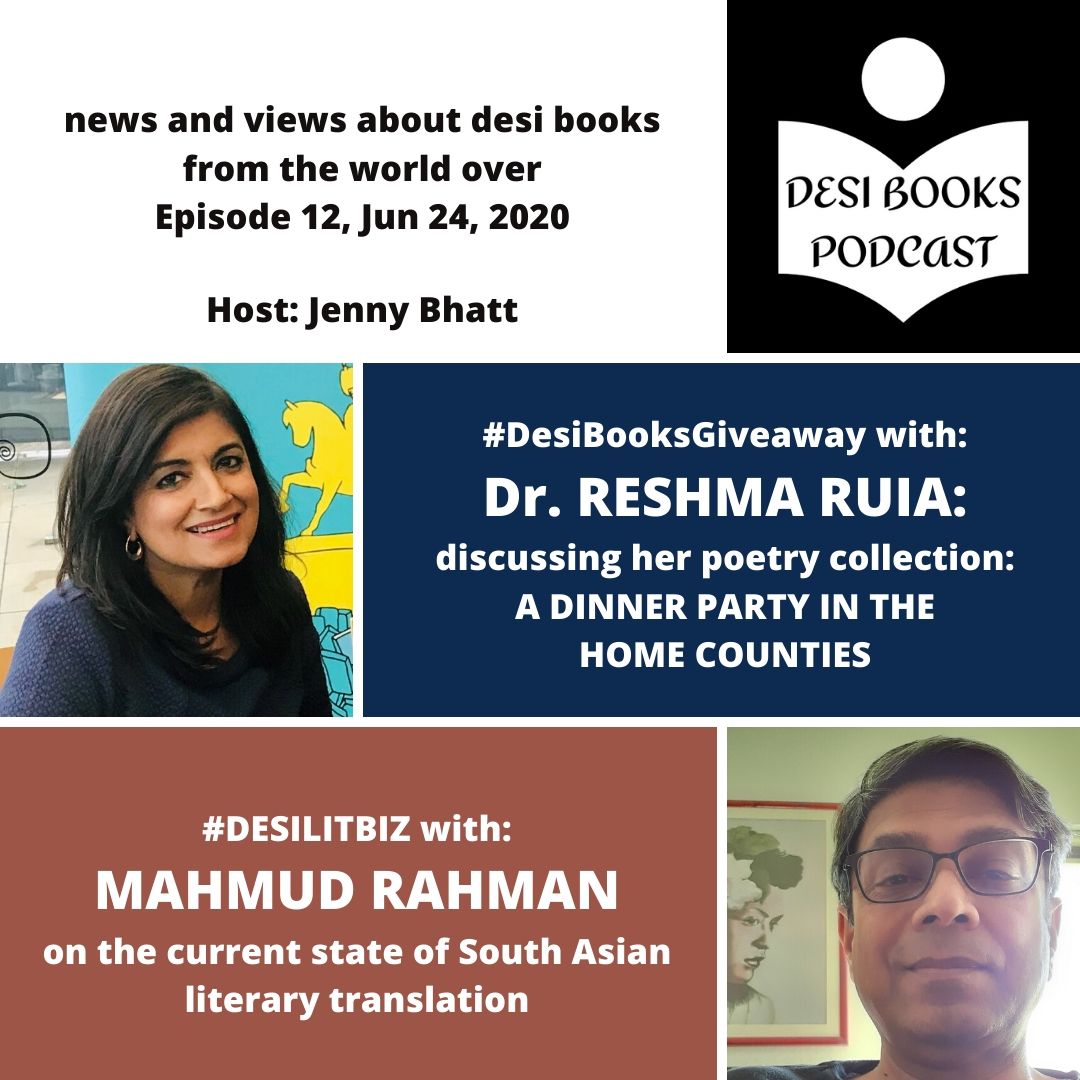 Hello and welcome to Episode 12 of DesiBooks — news and views about desi literature from the world over. I’m your host, Jenny Bhatt. Thank you for tuning in.

In today’s episode, in addition to the usual roundup of new notable desi books, short stories, poems, essays, interviews, awards, and more, we have Dr. Reshma Ruia sharing some thoughts and a reading from her poetry collection, A Dinner Party in the Home Counties, in #DesiBooksGiveaway. And we have Mahmud Rahman discussing desi literature in translation in #DesiLitBiz.

So settle in for a listen.

You can find all the titles mentioned in this “New Books” segment at bookshop.org, which benefits local, independent booksellers directly. Go to bookshop.org/lists/desi-books-2020. This is a US-based site so my apologies to non-US listeners.

1) This book came out in May but I missed it. The audiobook version is out now, so I’m including it. Folks of my generation who grew up in India or on Indian comics will remember the folktales of Vetaal and Vikram. This version is written in prose form by Gayathri Prabhu. And narrated by Mala Mangla.

2) Delhi: New Literatures of the Megacity is out this month, edited by Alex Tickell and Ruvani Ranasinha. It includes original contributions by Delhi-based commentators and covers new themes and genres like urban comix, digital narratives, literary reportage, and city biography.

Here are some new notable poems, stories, and essays from literary magazines and websites. I know I’m not getting them all so, if you know of new stories, poems, or essays published online by South Asian writers, please share them by tagging the @desibooks twitter account. Thank you.

Sarah Ghazal Ali has two poems titled ‘The Guest’ and ‘Dua for [  ]’ in the latest issue of Waxwing Literary Magazine.

Jeevan Anthony Narney has a set of poems at The Georgia Review in their summer issue. This does require a subscription.

A beautiful short story by Kritika Pandey is up at The Granta Magazine. ‘The Great Indian Tee and Snakes’ won the regional award for the 2020 Commonwealth Short Story Prize. Rightly so.

Tara Isabel Zambrano has a short essay up at Feed Lit Mag titled ‘Sometimes I Wave at the Birds to Remind Myself That I Exist’.

Sayantika Mandal has an essay up at The Citron Review titled ‘Mothballs’ and it’s about her mother, growing up in eastern India, and more.

Anjali Khosla writes at Gossamer Magazine about a weird experiment by a British department store in the late 1800s where they put 40 live Indian people in a display to show their visitors an Indian village. Please read it.

Kavita Puri writes about the India-Pakistan partition, exile, and memory at Pen Transmissions. It’s part of their exile series with the British Museum and Edmund de Waal.

Neema Avashia has an essay called ‘Chemical Bonds’ at The Kenyon Review Online. It’s about her father, the Bhopal Union Carbide tragedy, her own career as an educationist and activist, and more.

Aimee Nezhukumatathil has an essay titled ‘Octopus’ at The Georgia Review. I believe it’s from her upcoming book, World of Wonders. The magazine requires a subscription.

Bishakh Som also has some artwork at The Georgia Review for their Shelter in Place series. It also requires a subscription.

Saikat Majumdar has an essay up at the LA Review of Books about LGBTQ literary culture in India, post article 377 being struck down.

Sayantani Dasgupta has an essay titled Bollywood at One Hand Clapping Magazine about the nostalgia for Bollywood as an immigrant in the US.

Olivia Rutigliano writes about the film-maker Satyajit Ray also being a bestselling detective novelist over at CrimeReads.

Jana Igunma writes at Scroll.in about how 50 birth tales of the Buddha spread from Thailand to the rest of Southeast Asia. These stories also have parallels with ancient Indian literature too, of course.

The Hindi and Urdu literary translator, Daisy Rockwell, was interviewed at The Patriot by Mayank Jain Parichha about A K Ramanujan, Hindi-Urdu literature, and more.

Arundhati Roy is interviewed at DalitCamera.com on racism, global resistance, and what we all could do to be more aware and more active in these areas.

Maya Shanbhag Lang is interviewed at the LA Review of Books by Kavita Das about her new memoir, What We Carry.

The 2020 Polari Prize longlist has been announced. And Niven Govinden is on it with his 2019 novel, This Brutal House.

The Asian American Writers Workshop is looking for a Programs Manager and a Digital Communications Manager. More details here.

Mahmud Rahman is a writer and translator residing in California. Born in Dhaka, he came of age during the upheaval that led to the creation of Bangladesh. During the 1971 war, he was a refugee in Calcutta. In his adult life, he has lived in different cities across the U.S. His writing focus shifted to fiction in the mid-90s. His book Killing the Water: Stories, published in 2010 by Penguin Books India, includes stories of migrants and dislocated people, in Bengal, U.S. cities, and imagined territories. His second book, a translation of Bangladeshi writer Mahmudul Haque’s Partition-centered novel Black Ice, was published in 2012 by HarperCollins India.

In 2014, Mahmud wrote a blog post series on South Asian literary translations at Asymptote Journal. He spoke with various folks across the publishing ecosystem and gave a pretty good summation of the state of desi literary translation at the time. In this conversation, I talk with him about what’s changed and what hasn’t since then. And what we need to be doing to bring more excellent works from desi regional languages to the rest of the world.

Let me apologize for the tinkling sound in the first few minutes. That’s Remy, the Desi Books mascot. He has to always sit by me when I’m working and, if I don’t let him, there’s more noise. So please bear with Remy’s inputs there. No doubt, he’s also not happy with how desi translated works are being given short shrift across the publishing world.

Dr. Reshma Ruia is an award-winning writer and poet based in Manchester, England. She was born in India and brought up in Rome and did her undergraduate and postgraduate degrees at the London School of Economics. She worked as an economist with the United Nations in Rome and with the OECD in Paris.  Following her move to Manchester, she did a further Masters Degree and a Ph.D. in Creative Writing and Critical Thought at Manchester University. She is a fiction editor at the Jaggery Literary Magazine and a book reviewer at Words of Colour. She is also the co-founder of The Whole Kahani, a writers’ collective of British South Asian writers. Her first novel, Something Black in the Lentil Soup, was described in The Sunday Times as “a gem of straight-faced comedy.” Her second novel manuscript, A Mouthful of Silence, was shortlisted for the SI Leeds literary award. Her writing has appeared in The Mechanics’ Institute Review, The Nottingham Review, Asia Literary Review, Confluence, Funny Pearls, Fictive Dream, The Good Journal, and various anthologies. They have also been commissioned by and broadcast on BBC Radio. Her debut collection of poetry, A Dinner Party in the Home Counties, is a winner of the 2019 Word Masala Award and out now.

You’ll hear more about the book from the writer next. All you have to do to participate is enter your name and email address at the link below. No catch and your information will not be used for any other purpose. An optional request, not a requirement: please share the tweet or post with a friend using the hashtag #desibooksgiveaway. This won’t affect your chance of winning the book but it will certainly help the book get more visibility as it deserves.

Enter the giveaway at this link. It will run for seven days.

You’ve been listening to episode 12 of DesiBooks — news and views about desi literature from the world over.

The transcript will be up in the next 24 hours on the website http://desibooks.co.

DISCLOSURE NOTE: The books linked above are from Bookshop.org. There is a tiny affiliate commission payable to Desi Books if you buy a book using the link here. This helps pay toward the cost of running the podcast. Thank you.